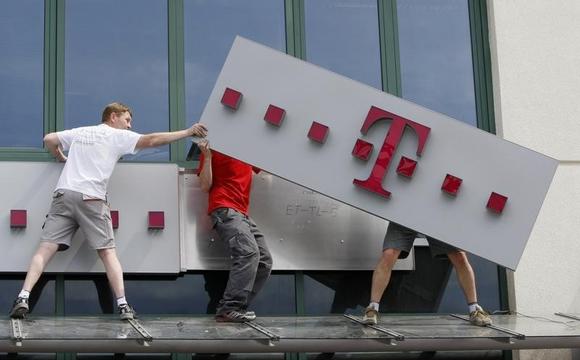 File photo of a T-Mobile logo being positioned on a shop front in Warsaw June 1, 2011.

WASHINGTON (Reuters) – Sprint Corp’s newly appointed Chief Executive Marcelo Claure has so far had a Midas touch in the telecoms industry, turning Brightstar, a reseller of U.S. handsets to Latin America, into a distributor valued at $2.2 billion when it was sold to Japan’s SoftBank.

But his talents will now be put to the test like never before as he must complete the No. 3 carrier’s network upgrade while trying to retain customers, who are defecting in droves.

“We are talking about billions of dollars of capital spending in front of this company before the network is ready,” MoffettNathanson analyst Craig Moffett said, noting that Sprint likely has to cut prices to compete with the industry’s top players.

Some analysts fear that Sprint’s decision to give up its dream of merging with T-Mobile US Inc could lead to a wider price war as the top carriers slug it out in a nearly saturated market.

“Without the ability to compete on scale they are going to have to compete on price, so the two smaller competitors may become increasingly desperate to maintain market share and could become irrational in pricing, which could cause disruptions in pricing in the industry,” said Mark Stodden, analyst at Moody’s Investors Service.

Sprint might follow the lead of T-Mobile, which added more subscribers than all of its competitors combined in the first quarter through aggressive promotions and campaigns that addressed customer frustrations with the industry.

“Sprint could take the same road and try to compete more aggressively on price, which could have the effect of restarting subscriber growth,” said Matthew Goodman, analyst at ITG Investment Research, who saw few short-term alternatives.

SUPERIOR NETWORK IN THE WORKS

Sprint, long the industry’s technological weakling, has not been sitting on its laurels. It has invested $5 billion to upgrade its much maligned network in a transformation likely to trickle down to customers by the end of next year.

Sprint’s new network should allow the company to combine the vast and spectrum it obtained from a 2013 acquisition of Clearwire Corp, with its other radio wave holdings. This has created a superior high speed offering known as Sprint Spark, which analysts say should be the best in the industry.

Still, even more investment is needed to make Sprint’s network competitive with those of other top carriers. Spark is only available in 24 cities, and its goal is to reach 100 U.S. cities by 2016.

The challenge will test the abilities of Claure, a Bolivian-born billionaire who got his start distributing cellular handsets from U.S. manufacturers in Latin America. Brightstar, which he founded in 1997, distributes phones to companies in the United States and elsewhere. SoftBank acquired the company in January.

“They still obviously need a lot of network expertise and they have that. But having someone in charge who is more marketing-oriented coincides with the chief executive of SoftBank’s outlook,” said Bill Menezes, an analyst at Gartner, referring to Japanese tycoon and Sprint Chairman Masayoshi Son.

“Masa is known for innovating pricing and marketing in Japan. He needs people to make Sprint their first consideration,” said Menezes.

Claure will have to shed Sprint’s image as a lower-quality provider at a premium cost. But discounting, especially to add market share as the new network is being phased in, is likely to reduce profit margins as well.

While AT&T Inc and Verizon Communications Inc have established reputations and T-Mobile has been plugging away at its “Un-carrier” brand for a year, Sprint has struggled to communicate what it stands for, said Jan Dawson of Jackdaw Research.

“Perception tends to lag reality by good couple years,” said Dawson. “Non-customers really have a poor sense of network quality. Even if Sprint starts to deliver better performance, it will take time for people to realize that,” he said.