Time Warner to go it alone as Fox exits stage

By Jennifer Saba and Aurindom Mukherjee 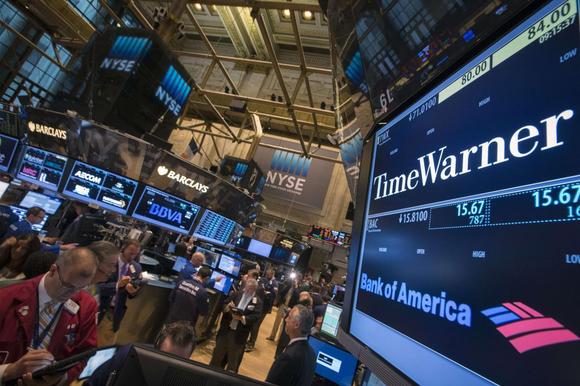 Traders work on the floor of the New York Stock Exchange July 16, 2014.

(Reuters) – Time Warner Inc (TWX.N) will not have to worry about any overtures from Twenty-First Century Fox (FOXA.O) for the foreseeable future.

“As you know, yesterday, we walked away. This is our resolute decision,” Fox Chairman and Chief Executive Officer Rupert Murdoch said in a rare appearance on the company’s conference call late Wednesday.

Murdoch, conceding defeat, was further explaining the company’s rational for pulling its bid on Tuesday.

Fox Chief Operating Officer Chase Carey backed up Murdoch and went further: “Let me be clear, we are done … We have no plans to pursue any other third party content company as an alternative to Time Warner.”

Earlier, Time Warner Chief Executive Jeff Bewkes, speaking on the company’s own earnings conference call, also weighed in on the scuttled Fox bid, which the CNN and Warner Brothers studios owner had aggressively resisted, as well as the merits of megadeals in general.

“I would just encourage everybody to look at all sides of the issue when contemplating the benefits and risks of putting very large companies together,” Bewkes said to an analyst.

Indeed, since taking the helm of the media conglomerate in 2008, Bewkes has trimmed down Time Warner – shedding properties like AOL (AOL.N), Time Warner Cable (TWC.N), and Time Inc (TIME.N) – and making it an attractive target for acquisitive-hungry rivals.

Bewkes said he feels that Time Warner is already at scale, especially for its studio business Warner Bros which he described as the “biggest producer of content in the world” to its collection of cable networks which also dominate.

“We are not lacking something we need,” he said.

Time Warner needs to show it can go it alone after fiercely refusing to engage in talks with Fox, which offered to buy it in a deal for about $80 billion and would have created one of the world’s largest media companies with two major studios, a bevy of cable networks and pay-TV channel HBO.

“When faced with a hostile takeover bid, Time Warner did exactly what they should have done. They crushed the numbers,” wrote Michael Nathanson with MoffettNathanson Research in a note to investors.

The strong results and shareholder-friendly measure could not prevent Time Warner’s stock from sliding. The shares closed down 13 percent at $74.24 – well below the $85 per share offer from Rupert Murdoch’s Fox.

Time Warner said it will host an investor’s day in the fall to unveil more details about its long-term strategy.

Revenue from Time Warner’s Home Box Office unit jumped 17 percent to $1.42 billion for the second quarter, helped by the popularity of “Game of Thrones” and other HBO shows.

The company said the fourth season of “Game of Thrones,” which ended in June, was the most watched season of an original series in HBO’s history. The Emmy award-winning fantasy epic had an average gross audience of 19 million viewers.

On an adjusted basis, the company earned 98 cents per share.

Analysts, on average, had expected a profit of 84 cents a share on revenue of $6.87 billion, according to Thomson Reuters I/B/E/S.

The company forecast full-year 2014 adjusted profit growth in the low teens in terms of percentage, off a base of 2013 adjusted earnings of $3.51 per share.

Time Warner said in April it expected its full-year adjusted profit to grow in the low- to mid-teen percentage range, or better, for at least the next three or four years.